The gopher tortoise (Gopherus polyphemus) inhabits coastal plain counties of Alabama. Populations in Alabama fall under two levels of protection: federal and state. Within the western portion of its range in Mobile, Washington, and Choctaw counties, the tortoise has been listed as a federally threatened species since 1987. In the remainder of its eastern range in Alabama, the gopher tortoise is protected by state regulation. Since 2011, the gopher tortoise has been recognized as a candidate species for inclusion on the endangered species list throughout its entire eastern southeast range. 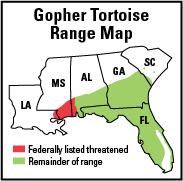 Gopher tortoises are considered a keystone species of the longleaf pine ecosystem, with many species depending on them for survival or benefiting from their presence. More than 360 species of mammals, birds, reptiles, amphibians, and invertebrates are known to spend all or a portion of their lives in either active or abandoned gopher tortoise burrows. Some species are completely or largely dependent on these burrows for survival.

As might be expected, gopher tortoise populations have had a similar fate as has the species habitat. The extent of the longleaf pine ecosystem in the southeastern United States has been reduced to less than three million acres, a small fraction of its former range. The rolling savannah-like world of the southeastern coastal plain is, for the most part, gone, and gopher tortoise populations are estimated to have declined by at least 80 percent in the last hundred years.

Gopher tortoises are considered a species of High Conservation Concern in Alabama and are fully protected by law. They are also listed as threatened or endangered at the state level in other parts of their range in South Carolina, Georgia, Florida, Mississippi and Louisiana.

In time, through reforestation of suitable sites to longleaf pine and the reestablishment of a more natural burning regime within existing stands, considerable acreage of mature or maturing longleaf pine habitat may be restored.  Also encouraging is the fact that numerous landowner cost share programs, both state and federal, are prioritizing planting of longleaf pine on sites best suited to them and using prescribed fire to maintain habitat.

The Alabama Forestry Commission, the Alabama Department of Conservation and Natural Resources, and the Natural Resource Conservation Service are leaders in this effort. Many non-government agencies such as the Longleaf Alliance are working through research, education, and commercial activities, to promote retention and restoration of longleaf pine on productive sites throughout the Southeast.

Through the cooperation of many government agencies, private entities, and conservation minded individuals the future of the gopher tortoise and the ecosystem of which it is a part will improve dramatically.

As the range of the potential listing of gopher tortoise has expanded and with the public announcement of the candidate species status, interest in the gopher tortoise and its possible effects on landowners has increased. Alabama Division of Wildlife and Freshwater Fisheries offices are seeing an increase in inquiries for information and management guidelines. Additionally, participation by division personnel in regional gopher tortoise conservation initiatives has evolved and demands increasing time. Some of those initiatives include Gopher Tortoise Mitigation Banking Team and Gopher Tortoise Candidate Conservation Agreement Team.

Participants at Gopher Tortoise Soil Meeting in 2015 at the Solon Dixon Center.